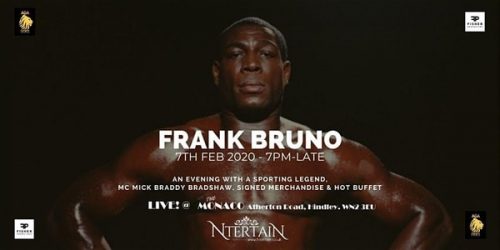 After the success of our previous Boxing Legend event with Ricky “The Hitman” Hatton AGA Events in association with Ray Fisher Promotions and Ntertain Events are proud to present an evening with Frank Bruno MBE.

During the evening guests will enjoy a no holds barred account of the highs and lows of this great sportsman’s life and career. There will also be an auction with signed sporting memorabilia presented by our fabulous MC for the evening Mick “Braddy” Bradshaw.

There are two ticket types for this event:

Franklin Roy “Frank” Bruno, MBE is a British former professional boxer who competed from 1982 to 1996. Bruno had a highly publicised and extremely eventful career.

The pinnacle of his boxing career was winning the WBC heavyweight title, in what was his fourth world championship challenge. He also held the European heavyweight title earlier in his career. Bruno was one of the most well-loved and recognisable boxers in British history, and faced multiple top-rated heavyweights during his career including two bouts with Mike Tyson and a domestic clash against Lennox Lewis. He won the WBC title in 1995 after defeating Oliver McCall at a packed Wembley Stadium. Bruno was known for his excellent punching power: he won 40 of his 45 bouts and 38 by knockout, giving him a 95% knockout rate from the fights he won; his overall knockout percentage is 84.44%.

Like Henry Cooper before him, Bruno has remained a popular celebrity with the British public following his retirement from boxing.

This event will be a sell out so book now to avoid disappointment.