An Evening with Ted Robbins 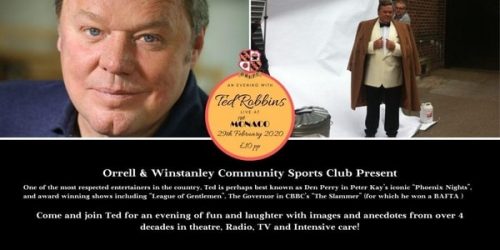 Join Ted Robbins for an evening of fun and laughter as he shares his experiences of 4 decades in Theatre, Radio, TV and Intensive Care.

Orrell & Winstanley Community Sports Club (the Joint Venture Partnership between Orrell RUFC and Winstanley Park Cricket Club) are delighted to announce that they will be hosting an Evening with Ted Robbins on Saturday, 29 February 2020.

One of the most respected entertainers in the country, Ted is perhaps best known as Den Perry in Peter Kay’s iconic “Phoenix Nights”, and award winning shows including “League of Gentlemen”, The Governor in CBBC’s “The Slammer” (for which he won a BAFTA )and with Victoria Wood for many years.

He starred as Mary’s love-rat interest in Coronation Street and even fixed Dame Helen Mirren’s bike in “Calendar Girls”!

As a clean and reliable stand up comic, Ted was for many years the go-to warm up for virtually any TV show with a studio audience.

He is an accomplished and experienced MC, presenter and after dinner speaker, with an impeccable delivery and ability to gauge his audience.

A presenter with BBC Radio Manchester and Lancashire and a regular on-screen reporter for BBC One’s “Inside Out”, Ted lives with his wife Judy in Lancashire but works all over the place. Come and join Ted for an evening of fun, laughter and OUTRAGEOUS NAME DROPPING. With images and anecdotes from over 4 decades in theatre, Radio, TV and Intensive care. Their is a chance to even mingle at the bar afterwards with Rossendale’s favourite son.