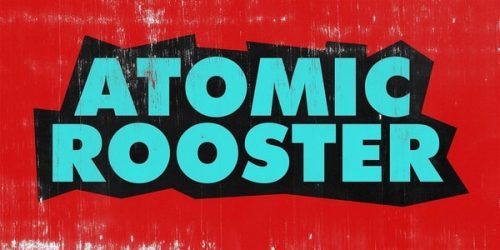 Legendary Prog Rockers ATOMIC ROOSTER stop off at The Old Courts for the first time. The band features original members Steve Bolton (Guitar) & Pete French (Vocals) who are joined by along with Adrian Gautrey (organ), Bo Walsh (drums) & Shug Millidge (bass.) One of the seminal British prog rock bands of the 70s – they owed much of their success, appeal and writing to Hammond Organ maestro Vincent Crane.

Originally playing with The Crazy World Of Arthur Brown on huge hit ‘Fire’ with Carl Palmer, Vincent left Brown and put together Atomic Rooster. Although Crane has passed, Bolton & French from the Rooster’s peak 70’s line up have – with Crane’s widow – Jean’s blessing reformed the band and taken to the road.

“French and Bolton have brought back to life an amazing back catalogue of music. Standout tracks tonight included Tomorrow Night, Black Snake, Save Me, Devil’s Answer, Death Walks Behind You and Breakthrough. ” “It’s no secret that Steve Bolton is a master axeman and he led the band through a stunning version of Black Snake before unleashing an instrumental in honour of Vincent Crane. Save Me and Devil’s Answer proved to be the perfect crowd-pleasers but what could possibly top these classic songs so early in the set? The answer was bullish versions of Decision Indecision and VUG before the iconic Death Walks Behind You. The evening was moving on at lightning speed and the party had already built up to a crescendo for most of the Proggers present.” “But the Rooster were far from finished: Head In The Sky and Break The Ice maintained the pace and proved Prog is not for the faint hearted.

The greatest hits set ended with The Price and Breakthrough sparking calls for more. It’s easy to overlook a band that hasn’t put out a studio album since 1983 but on this form every rock fan should revisit the Rooster.” Colin Davies at Cambridge Rock https://www.hrhmag.com/2017/03/26/hrh-prog-v-rewind-atomic-rooster/

“It really is great to have this Atomic Rooster line up on the boards and sounding as fine as this ensemble did tonight. The heart of the group sound is still the throaty, swirling organ playing, but add to this nimble basslines, sharp guitar, powerful drumming and the so professional singing of Pete French and you have an exciting show. The audience were with the outfit every step of the way this evening.”

“…At one point, when he (French) sang the ‘My Whole World’ lyric of I think Don’t Lose Your Mind over gentle keyboard arpeggio’s it was one of the easily one of best performances I have ever seen, reminiscent of my beloved West Coast bands Spirit and Sagittarius. Powerful but touching and on this sort of number, few can touch him.” Pete Sargeant, www.justlistentothis.co.uk at Under The Bridge, London,