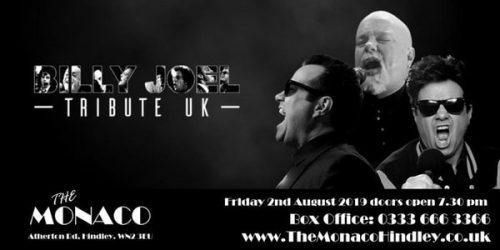 Join us at The Monaco, Hindley for an amazing night of Billy Joel’s Greatest Hits. Including Just The Way You Are, Uptown Girl, River Of Dreams, Big Shot, New York State of Mind, Piano Man, and many many more…

Having sold more than 150 million records, Billy Joel ranks as one of the most popular recording artists and respected entertainers in the world.

Billy Joel Tribute Uk, Gaz Jenkins has produced a show to this popular icon that covers all his greatest hits and will have audiences rocking and singing all night long.

In 2016, Gaz joined the UK’s longest-running tribute show – Trevor Chance’s Legends – where he honed his skills as a host and compere. Having been a Billy Joel fan for over 25 years, it was a natural progression for him to develop a tribute to one of his childhood idols.

With his training in theatre, Gaz brings the fire and passion of the ‘Piano Man’ to the stage, along with authentic costumes and choreography that will make you believe that you’ve travelled back in time to see the Long Island boy in his prime.

Don’t miss out on this fantastic night of entertainment BOOK Now!