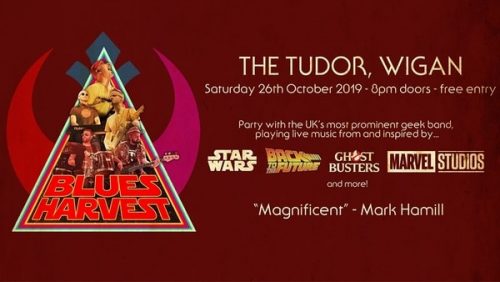 Blues Harvest have built up a solid reputation as the go-to party band for geek events, having played their blend of Star Wars parodies and other classic movie songs in comic-cons, space centres and cantinas across the galaxy. They have performed shows at the National Space Centre, Disneyland Paris, Star Wars Celebration Chicago and recently were joined on stage by special guest Ray Parker Jr for a show-stopping rendition of his hit ‘Ghostbusters’. The band even counts Luke Skywalker himself a fan, as actor Mark Hamill described one of their Star Wars songs (Tatooine Sunset) as “Magnificent! I now declare THIS as my official, unofficial Luke theme song!”

Adapting their name from the working title of ‘Return of the Jedi’, Blues Harvest are the most in-demand band for comic conventions across the UK and beyond. Fronted by comic book illustrator and writer Nick Brokenshire (Star Wars Adventures / IDW / Dark Horse / 2000AD) the band perform songs featured in hit movies such as Guardians of the Galaxy, Back to the Future, Thor: Ragnarok and Ghostbusters, as well as their own Star Wars parodies featuring original arrangements of the iconic John Williams score.

The band can’t wait to bring their blend of geek entertainment to Wigan, and since this is close to Halloween expect to hear a few horror related tunes in the set!