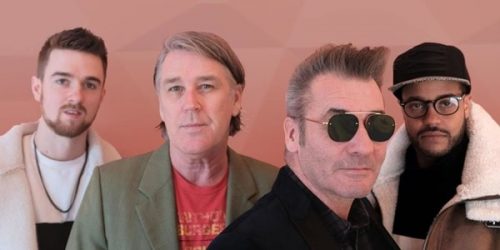 After recent sell-out tours of the UK and America, China Crisis returned to the spotlight in 2017 with their new album ‘Autumn in the Neighbourhood’, their first album of new material in 20 years. This year also see’s Caroline International reissue the band’s first three albums Difficult Shapes, Working with Fire and Steel and Flaunt the Imperfection as expanded multi-disc deluxe editions

Eddie Lundon and Gary Daly are the founder members of the band which started in Kirkby, Merseyside back in 1979.
Known for their string of hit singles, including African & White, Christian, Working with Fire and Steel, Black Man Ray and Wishful Thinking, and achieving 3 Top 20 albums.

Support on the night comes from fantastic singer-songwriter Chris Layhe. A founding member of Liverpool alternative rock band The Icicle Works who had chart hits including Birds Fly, Understanding Jane, & Love is a Wonderful Colour, The Icicle Works enjoyed huge success touring the UK & US alongside the likes of top bands, including Chrissie Hynde & The Pretenders. Though primarily a bass player Chris continues to perform his own work solo, and has also performed with various other outfits including blues rock band ‘Oyster’, indie rockers ‘Shadow History’, and with Australian singer/guitarist Ben Winch. His most recent venture has been to join forces with singer/songwriter John Anderton where he enjoys playing at various venues in and around the North West.