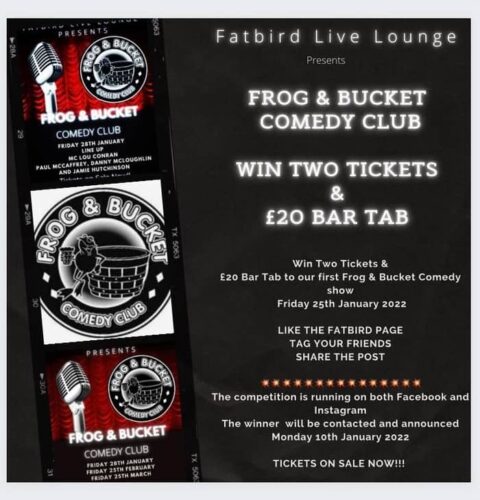 Comedy Night at Fatbird Live Lounge in association with Frog and Bucket Comedy
Friday 28th January 2021
Tickets on sale now £12.50
The first line up is
MC Lou Conran, Paul McCaffrey, Danny McLoughlin and Jamie Hutchinson
Paul McCaffery: As seen on Live at the Apollo, Russell Howards Good News and Impractical Jokers, Co-host of the hit podcast ‘What’s upset you now?’ and tour support for Sean Lock and Kevin Bridges.
“Born to be a Comic” The Scotsman “Never anything less than gut-bustingly hilarious” GQ “McCaffrey simply has funny bones” Shortlist
Jamie Hutchinson: Former XS Manchester Comedian of the Year Jamie Hutchinson is one of the brightest sparks on the UK circuit. His commanding stage presence and razor sharp wit make him a sought after act for major clubs across the country. He has headlined the prestigious Big Value Late Show at the Edinburgh Fringe and was nominated for the Leicester Mercury award
Lou Conran: voted Best MC in the Comics Comic award 2020/21 is co-host of the critically acclaimed podcast “Spit or Swallow”,and she’s currently on tour supporting Sarah Millican. She’s basically bloody marvellous (and yes she did write this herself).
Tickets
+ Add to Google Calendar+ Add to iCalendar