End of Season Party in the Park 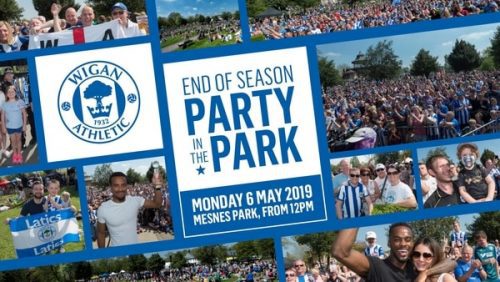 Wigan Athletic, in association with Wigan Council, are delighted to announce an End of Season Party in Mesnes Park on Bank Holiday Monday 6 May, from 12pm!

After the success of last season’s ‘Promotion Party in the Park’, Latics will be working with Wigan Council to host another special afternoon that brings the football club together with its supporters on the May Bank Holiday weekend.

Hosted by WISH FM’s Chris Milow, there will be a big screen at the bandstand, on which some of the season’s highlights will be played as well as some of our most popular videos of the season.

There will be opportunities for photos with your favourite players, who will make their way around the park to meet supporters and there will also be Q&As on stage with executive chairman Darren Royle, manager Paul Cook, his staff and some of the players.

Entertainment will be provided for kids of all ages and there will be delicious food and drinks provided by a selection of bars and street food traders, selected by our partners Haigh Foodie Friday.