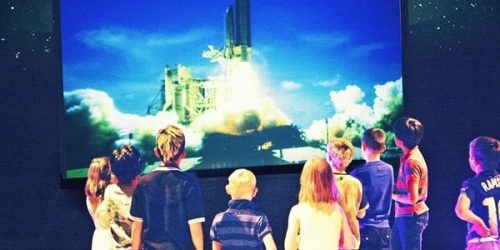 An interactive mission for 7-12 year olds.

You are Ground Control, and Futuretron is asking for your help. Here’s the situation: in 1974, a manned mission was sent into space to look for inhabitable planets. Now, in present day, the sensors aboard Shuttle X27-40 indicate that it may have found just such a planet.

The three astronauts on board are about to be woken from their hypersleep, and they are going to need to know how to go about setting things up. Problem is – they’re from 1974. They think that Charles Aznavour is groovy and that the computer mouse is a cutting edge invention. They need to know what the world is like today – what is cool, what is relevant, what is fair and important and what is on the minds of the population – and who better to advise them than…you?

If you had to start from scratch, how would you decide on the name, the laws, the cuisine? What do you love, what’s important to you, and what will everybody be dancing to when the anthem comes on? Through a series of ‘modules’, Futuretron playfully asks participants to decide an identity for the planet, to decide its laws and what it will hold culturally important.

The result is a civilisation unique to each group that takes part.

Using a giant projection screen and a live, highly intelligent computer (well, Futuretron), the participants are given control of the technology and asked to work in a team, and individually, to decide the future of their new planet.