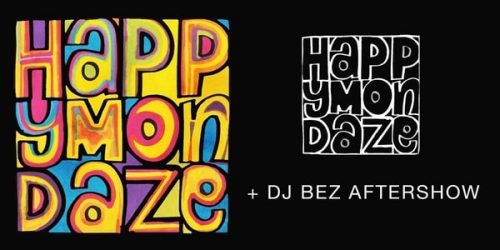 Lock up your daughters and call the cops, as a night of carnage and chaos is coming to The Old Courts – Happy Mondaze are joined by Bez & Arlo, and SWJ Group.

The groove, the dirt, the sex, the danger and the nostalgia of one of England’s most pivotal bands reimagined.

From the dirt of Squirrel and G Man, the attitude of Bummed, slick grooves of Pills n Thrills
and the hedonism of Yes Please. The world’s only tribute to the ground-¬breaking sounds of the Mondays brings to you an authenticity like no other tribute band. Billed as ‘spooky’ by Bez, the Mondaze deliver a 90 minute show that revives and recreates the punk-fuelled energy of the late 80s and early 90s rave scene.

“Really excellent band, great show. This is as near to the ‘real deal’ as it gets. Wonderful!” – Former Happy Mondays Manager Phil Saxe

“They’ve got the Mondays down to an E” – Salford Star

If that’s not enough….

Bez will be on stage for the official aftershow as ranting lead preacher and mover that hosts the party, whilst his son Arlo hits the decks spinning massive Hacienda & Madchester Classics.
If you have never attended a Bez show, then you are in for a treat….

Support on the night comes from SWJ Group: a Mancunian band who make music to nod your head to…
Funky, groovy tunes with a hint of Manchester grit, they hit a groove and stay on it, making every gig an event filled with happy vibes.
Wah, beats, keys and above all else – top tunes, combine to make a huge sound, some call it Slacker Funk, some call it Mancadelic – It’s best you see them and make up your own mind!
In the words of the band themselves “All you got to do is live and love”

“Whilst many people still listen back to the ‘Madchester’ era, SWJ Group use the inspiration but also new creation: putting out something powerful, punchy and infectiously catchy “(Louder Than War)