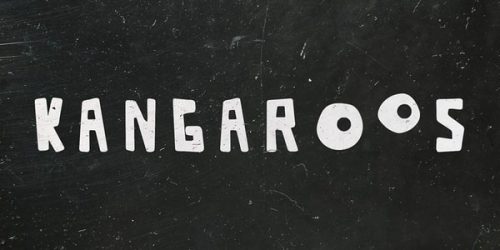 Drawing on influences such as The Beatles, The Beach Boys, Buddy Holly and Crosby Stills and Nash, feel-good festival favourites KANGAROOS come to The Old Courts for the first time as part of their 2020 tour.

Support on the night comes from acoustic duo Lily & Alannah. The local sisters bring feel good vibes, brilliant harmonies and perform a mix of their own original material and carefully chosen covers, all delivered in their own style.

Also on the bill we’re pleased to welcome back fantastic singer-songwriter Derek Martin who over 4 recording sessions throughout 2018 Derek recorded 10 tracks to become the debut album Dreaming Out Loud (Scottish Album of the Year Nominee 2019).

From the blistering Life in a Minor Key, the anthemic Calm Before the Storm to the heartfelt lullaby Nightingale – the songs came to life and a dynamite album was created. All the songs are in the vein of his classic song writing heroes such as Bruce Springsteen, Tom Petty, George Harrison and Noel Gallagher.
Praise for Dreaming Out Loud:
“Blown away by the sheer take no prisoners energy and commitment of performance!”
BBC Radio 6 DJ Tom Robinson and“Best debut album I’ve heard this year!” Pulse 98.4 DJ Ronnie McGhie.

2019 has seen KANGAROOS band take Liverpool by storm with spots at Sound City, BBC6 Music Fringe Festival & Skeleton Coast Festival which was headlined and part curated by ‘Wirral Riddler’ Miles Kane, add to that support slots for the likes of The Coral, Peach Fuzz and you’ve got a band that you should be keeping an eye on and an ear out for.

This Scouse supergroup shares members with Tramp Attack, The Hushtones & The Blurred Sun Band and they are currently recording in the legendary Parr Street Studios with the help of Skeleton Key Records.

KANGAROOS are an English Merseybeat vocal harmony group (think The Coral, The Zutons) expect the feel-good Rock n’ Roll vibes of The Beatles infused with elements of Doo Wop, Jazz and Surf Rock.

Their songwriting pedigree harks back to the golden age of pop music, when singles needed to concisely fit on a 7” vinyl record; to a time when radio was king.

Following a rigorous gigging schedule in 2019 and feeling like Liverpool’s best kept secret, it wouldn’t surprise us if 2020 was the year of KANGAROOS. Their songs will tug at your heartstrings, make you smile and run to the dance floor.

“An under the radar pick maybe, but KANGAROOS so impressed us with their set at one of the Getintothis Deep Cuts nights that we would very much like the chance to catch up with them again. KANGAROOS provide a classic Liverpool sound, think the Beatles cutting lose and rocking out and you might be getting there. Definitely one to watch.”

“… a steady stream of people come through the door in time to see KANGAROOS do their thing. We’d guess they’re reasonably familiar with The Beatles, albeit there’s more rock going on. It is nevertheless an unmistakable Liverpool sound. They mix around vocal duties as well as juggling guitars and keyboards, it’s all good natured fun and the crowd are well into the groove.”

Get Into This, Liverpool

Full line up and approximate stage times to be confirmed