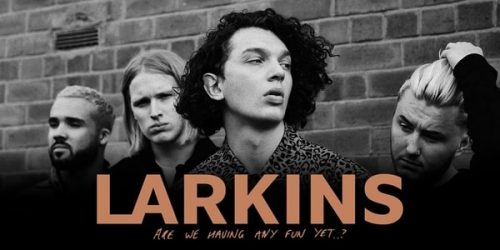 Join us at The Old Courts as we welcome back Larkins!

Larkins return to The Old Courts after touring extensively in 2018. This included a headline tour to thousands of new fans across the UK and Europe. The band’s rise is evident in their upcoming headline hometown show at Manchester’s Albert Hall in March, before selling out Dingwalls in London in June.

Already with support from the likes of BBC Radio 1, Radio X, and Zane Lowe flooding in, it’s clear that Larkins are embracing their status as one of the most exciting and in-demand bands to have emerged from Manchester in recent years.

Since the release of their independent debut EP in 2016, Larkins’ atmospheric and hook-filled brand of indie pop has seen them develop a fervent fan base and move from strength-to-strength, especially within the chaos and theatre of their live shows. With the release of ‘TV Dream’ marking the start of a more powerful, bass-driven sound, Larkins aim to make a lot of noise in 2019.

Support on the night comes from two fantastic local bands that are making waves around the North West: Stanleys, and Pink Shirts For Pale People.