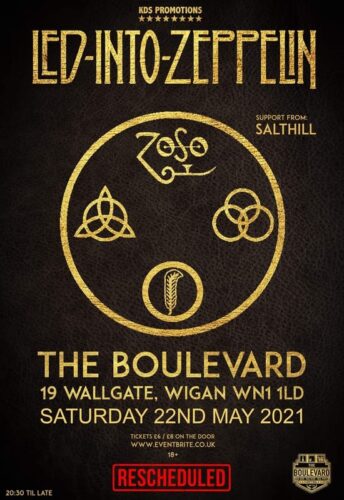 KDS Promotions brings the UK’s No1 Led Zeppelin tribute to The Boulevard for a fantastic night of all their greatest hits and more.

Led Into Zeppelin have been getting rave reviews from every show! They are the ultimate tribute to one of rock n roll’s most remarkable stories – Led Zeppelin. “So close it’s scary. Not only the best musicians but also the best Robert Plant sound alike out there” – Paul Kappa (Led Zeppelin fan).

Salt Hill are a five piece alternative-rock band from Merseyside, formed in 2017. Their latest single ‘Summit’ is now available on Spotify, Amazon Music and more!
Tickets: £8.00 plus booking fee.

This is a 14+ event. Under 18’s must be accompanied by an adult at all times.