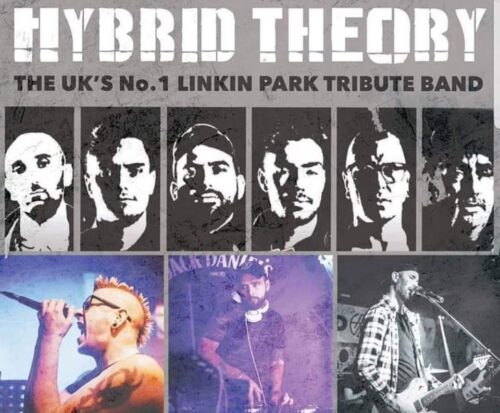 KDS Promotions brings the UK’s No1 Linkin Park tribute to the Boulevard.
Hybrid Theory – The Linkin Park Tribute – formed in 2017 they have worked hard to become the most authentic Linkin Park tribute, capturing the sound, energy and spirit of the original band, while respecting and paying tribute to Chester Bennington. Since their inception they have toured extensively around the UK selling out shows and have toured with two of the most prominent nu-metal tributes on the scene (Korn Again and Stiff Bizkit) on the Family Values Tribute Tour in 2018. Whilst paying respect to the original band, they pull out every stop to provide LP fans with the biggest, most intense, energetic and emotional performance possible. As the band name suggests Hybrid Theory focus on Linkin Park’s earlier material with their repertoire mainly consisting of songs taken from the two first albums. As big Linkin Park fans themselves, every show is a great opportunity to share their passion with other like-minded LP fans who want to relive the LP experience. If you have a ticket, you’re in for a special encounter.
Slick Cupid are a UK Band from Southport, Merseyside. The pop punk/ metal/ alternative rock band formed in 2011 and continue to play all over the UK.
Devils Henchmen are a young, up and coming original band from Liverpool, blending a wide range of influences from rock, grunge and metal to create their own unique sound.
Tickets: £10.00 plus booking fee.
This is a 14+ event. Under 18’s must be accompanied by an adult at all times.
Tickets