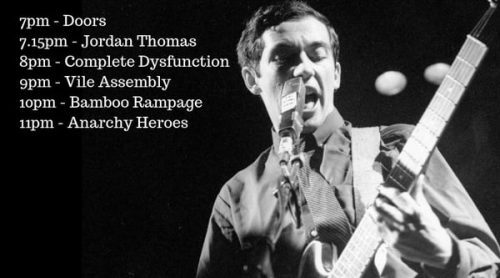 Pete Shelley (Peter Campbell McNeis) singer/songwriter and guitarist for the punk rock group The Buzzcocks, who sadly died on 6/12/18. Pete was born to Margaret and John McNeish at 48 Milton Street, in Leigh. Margaret was an ex-mill worker in the town, while John was a fitter at the nearby Astley Green Colliery.

To show respect and honour Pete’s legendary contribution to the music scene I feel the least we can do is erect a statue in our borough to one of our lost legends.

In order to fund this we will be putting on several gigs and fundraisers of local bands, this is the 2nd gig with another great line up. Tickets £5 or £7 on the door, tickets available on the link and at Skin Graffiti Tattoo Studio, Library Street, Wigan.