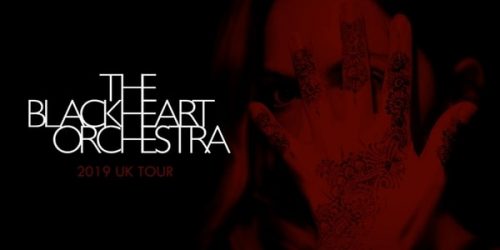 The Old Courts are delighted to welcome back The Blackheart Orchestra, this time to our Theatre for what will be a special and intimate performance from start to finish.

Described by Rock Society magazine as “One of the most extraordinary female voices singing anywhere” and by Genesis Legend Steve Hackett as “Beautiful, powerful and inspiring” award-winning British songwriters, composers and multi-instrumentalists Chrissy Mostyn and Rick Pilkington are The Blackheart Orchestra.

After 10 years of concert touring across the world, four acclaimed albums, appearances on Good Morning TV, Radio 2 and awards ranging from winning Best British Duo in the Exposure Music Awards to #4 Best New Band of 2018 in PROG magazine’s readers’ poll and then being nominated for The Limelight Award in the 2018 Progressive Music Awards, the unique Blackheart Orchestra have become one of the must-see bands of 2019.

The pioneering duo blend musical styles seamlessly sidestepping boundaries to create music huge enough to fill a cathedral. Well known for producing music beyond all easily marketed genres, their multi-instrumental sonic landscapes have always been too unpredictable for pop, too adventurous for the mainstream and too plain weird for folk. Fusing acoustic fragility and electronica, The Blackheart Orchestra bring together stringed instruments with 80’s synthesisers and classical influences. Often mistaken for an 8-piece band on first listen, their stage has been described as a ‘musical spaceship’ or ‘laboratory’ where they are to be found continuously changing from electric and acoustic guitars, bowed guitar, piano, organ, bass and electronic percussion to vintage synthesisers, omnichord and melodica in a complex choreographed weave of musical moods and textures. One moment their sound is minimal and molecular, the next a mountain-like wall of sound with vast symphonic climaxes.

Their four critically acclaimed albums and mesmerising live shows have won them obsessive worldwide fans, plaudits from musical giants and placements on TV commercials and films. Chrissy Mostyn’s haunting vocals, the Mike Oldfield-like multi-instrumental playing of Rick Pilkington plus their fearless combination of conventional and unconventional all reflect their self-created universe where art meets sound and words paint pictures that take you with them on their deep musical journey into the human psyche.

Nominated for The Limelight Award

“Their songs are all stand-alone masterpieces” Fatea Magazine

“A special and singular voice” Highclouds

“Smouldering and brooding, a mesmerizing performance” Louder Than War

“Cinematic yet intimate, from intense and soaring to dreamy and tranquil…exquisite”

“They remind us why music lifts us up” Dalton Delan, American Public Broadcasting (USA)

“From heartbreaking to uplifting in a single song” Western Star (Australia)