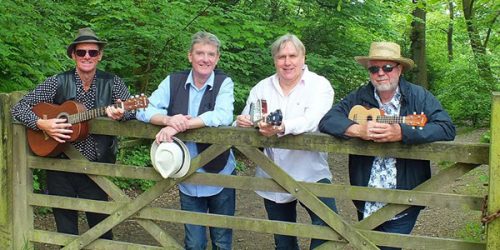 Formed in 1975, The Houghton Weavers made their television debut in the BBC’s talent show “We’ll Call You”. So successful were they that, within a couple of months they were given their own show “Sit Thi Deawn” which continued for six series over seven years and had the highest viewing figures for any regional T.V. programme.

Their Fan Club consists of members ranging in age from three months to 100 years and stretches as far afield as the USA, Canada, Bahrain, Belgium, Australia and Germany.

The Houghton Weavers guarantee a wonderful evening of song and humour. Their experience in the business together with their style and professionalism ensures that, as their motto says, they will always “KEEP FOLK SMILING”. Their gig at The Old Courts is a charity event to help a local dance school “AQDC” take nearly 70 students to perform on Broadway in NYC next July.

Full line up to be announced shortly

Tickets: £15 advance and at door