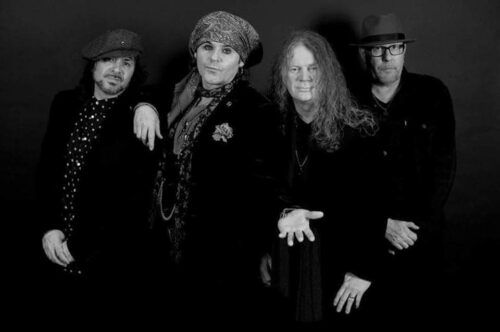 KDS Promotions are delighted to present the world famous Quireboys for an up close and personal unplugged night as part of their 35th anniversary tour. What a chance this is to see a band who have played many arenas and have toured with the Guns n Roses.
The Quireboys – This Is Rock And Roll have always remained true to their roots from their launch in 1984. The boys have had a huge revival of late, consistently releasing new material and selling out venues all around the world. There’s no sign of Spike, Griff, Keith and Paul slowing down anytime soon!
Matt Mitchell & The Coldhearts – Matt Mitchell, who is deemed by Planet Rock as ‘The premium example of a modern classic rock singer’ has been known as the voice of a few bands before carving out his latest solo debut. AOR band Pride, heavy rock band Furyon and blues rock band Colour of Noise were all fronted by the British singer. With much appraisal from magazines such as Classic Rock, Metal Hammer, Fireworks, Powerplay and This is Rock (to name a few) – Matt Mitchell has received a wide range of print and online press. BBCRadio 2 and Planet Rock are amongst the radio stations that have championed the singles from the self titled debut. Not only has Matt played shows in the UK, Europe, Russia and South America – he has also performed at several major festivals including Download, Bloodstock, Steel House, Ramblin Man Fair, Hard Rock Hell, Planet Rock Stock, PPM Fest, and Poland’s gigantic Poland Woodstock Festival. In late 2017 the doors opened for a new venture in the shape of Mitchell’s solo band with guest players – Matt Mitchell & The Coldhearts. The band recorded their debut album at the iconic Rockfield Studios in Wales and shortly after in 2019 we heard the first of this new venture. Excited and ready, Mitchell is proud to be a part of the ‘New Wave of Rock n Roll’ #NWORAR.
Atlas UK are a five piece melodic hard rock band from Manchester. The debut album “In Pursuit of Memory” was released worldwide September 28th 2018 through AOR Heaven and is available to purchase from all major music retailers.
Tickets: £15.00 plus booking fee | OTD: £20.00
This is a 14+ event. Under 18’s must be accompanied by an adult at all times.