Who Knows Where The Time Goes? Songs of Sandy Denny 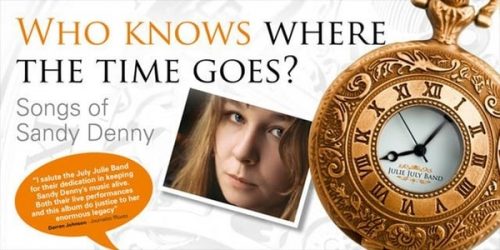 The Old Courts are delighted to welcome the Julie July Band to our Theatre for what will be a special night celebrating the music of Sandy Denny.

The Julie July Band has built a substantial reputation on re-interpretations of Sandy Denny’s songs and play a heartfelt tribute to the great singer-songwriter. From dreamy acoustic melodies, to driving progressive folk-rock, she was one of the UK’s singer songwriters of the British Folk-Rock movement. In her brief career she left a legacy of beautiful, haunting original and traditional compositions. Richard Thompson called her ‘The Greatest artist of her generation”. Melody maker readers twice voted her ‘Best British Female Singer” in 1970 and 1971. Her most famous song “Who Knows Where the Time Goes?”, was voted favourite folk-track of all time by listeners of BBC Radio 2 and has been covered by many artists including Judy Collins, Nina Simone, Eva Cassidy and Kate Rusby. Now, 40 years on, the band perform a selection of her songs from: The Strawbs, Fotheringay, Fairport Convention and her solo career.

“I salute the July Julie Band for their dedication in keeping Sandy Denny’s music alive. Both their live performances and this album do justice to her enormous legacy. (Darren Johnson – Journalist fRoots)

“A marvellous night! Julie was superb, her voice is beautiful and did justice to the Denny legacy. The band were a treat, special mention for the lead guitar (rock God!) Check out the Julie July Album! (Stephen – Huntingdon Hall – Worcester.)